There are three types of certificates that your application can be signed with. Each certificate generates a different Key Hash.

There are two ways to generate your Key Hash:

After hitting “Save” in the “Create new credentials” step, you will see your credentials listed with the newly generated IBM Video Streaming Player SDK key.

The provided zip archive contains the sample Android application project for IBM Video Streaming Player SDK for Android. The sample application uses the Player SDK as an AAR dependency found in the /m2repository folder in the archive.

Step 4: Create (or open) your project

Open the project that you would like to integrate the IBM Video Streaming Player SDK in. Update the AndroidManifest.xml of your application with the following permission:

Step 5: Add the SDK to the project

Import from local repo: copy the m2repository folder to your project. In your project’s build.gradle put the Player SDK dependency:

You can find this in the sample application also, just copy those settings.

In your layout .xml

Place a PlayerView in your layout:

In your Activity or Fragment

Create a PlayerFactory in your Activity or Fragment with the Activity’s context:

This factory can be used to create or retrieve IBM Video Streaming Player instances. IBM Video Streaming Players created for a specific playerId will be retained across configuration changes (like orientation change). Requesting a player with the same playerId will create a new Player interface, but that interface will belong to the same player instance. The previous player for the same id must be detached before attaching a new one.

In your Fragment’s onCreateView() or Activity’s onCreate() find your playerView and get a player instance from the factory:

Where playerId can be:

The com.ibm.video.android.player.api.Player class is the point where you can interface with the Player SDK. Its methods send events to the player, and its states are observed through the listeners (see below). The Player’s methods are explained further in its Javadoc.

After the player is created, initialize it with a live or previously recorded video content. This will most likely be in your Activity’s onCreate() (Fragment’s onCreateView()). A player instance can be initialized more than once with different content, but connect() or play() must be called in order to reconnect to the servers. The connect() method is optional (a play() or pause() call will also handle it implicitly) though the player will respond to play() calls more quickly because it is already connected to IBM Video Streaming’s servers.

To receive state changes and other events from the player you need to set listeners. There are mandatory and optional ones, but all listeners must be set prior to calling player.attach() on your player instance. This should happen in the onResume() or onStart() callback of your Activity or Fragment. Calling attach() is an important step, this is where your listeners and the player view is bound to the Player SDK. Forgetting to call this will cause the player to not render video on your View, and you will not receive any callback on your listeners. Also, since version 0.9.0 this is the place to set your PlayerView to the IBM Video Streaming player. The reason behind this is, now you can optionally pre-buffer your player by calling player.pause() without the need to add a PlayerView. PlayerView can be set later, when it is appropriate. For example, a news feed like application’s PlayerViews will be in a RecyclerView.

You also need to call player.detach() in your Activity’s or Fragment’s onPause() or onStop() callback, so your views can be recycled properly.

See the next section and the sample application for more details.

Changing content on an already initialized player (Please note detach() and attach() must be called to properly reinitialize views):

This diagram represents the state flow of the Player SDK, the nodes are the states reported by the player, while the named edges are events that can be sent to the player. There is a decision in the flow that happens automatically based on the content selected (live or recorded). 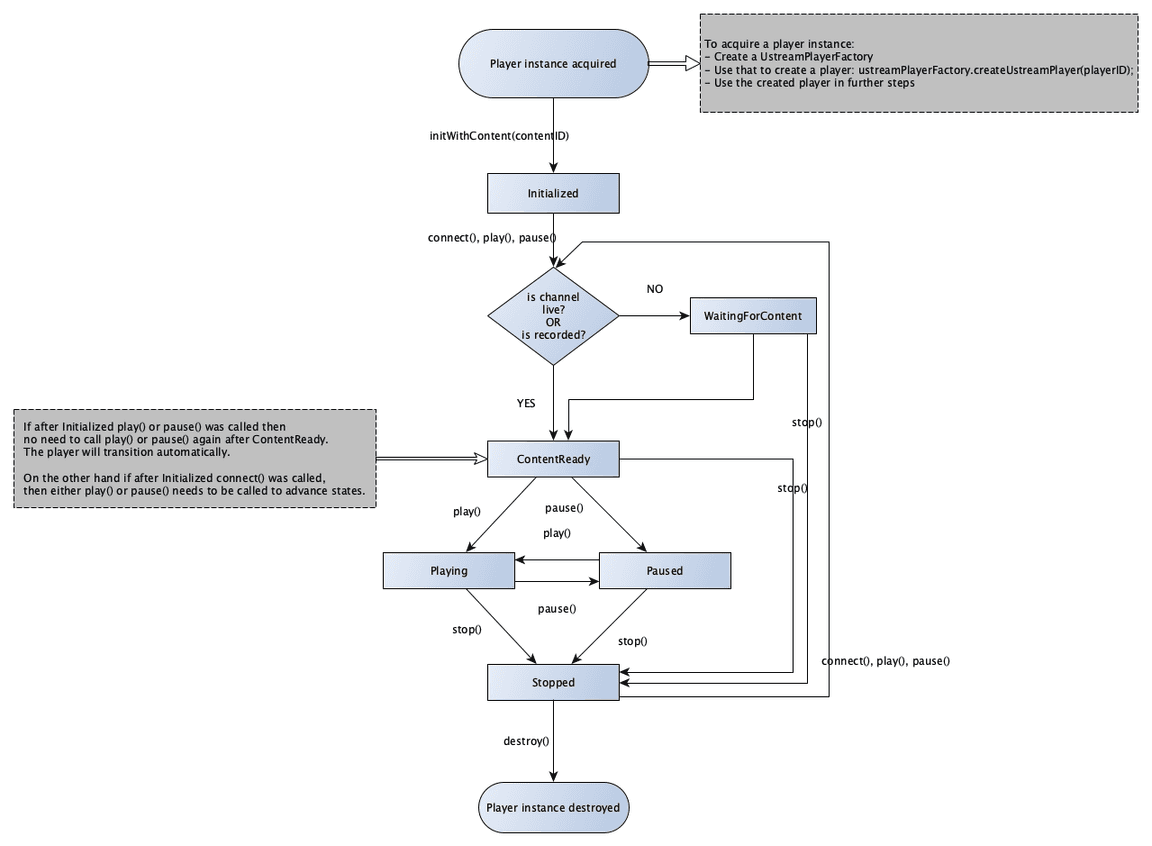 There are eight different listeners that you can add to the Player SDK instance to receive callbacks. Some of these listeners are mandatory, others are optional, but each listener represents a group of functionalities of the Player SDK.

The eight listeners are:

The PlayerListener is the most important listener, this is also a mandatory one, you must provide it, or you will receive an exception. The Player SDK’s state is observed through this interface.

This is also a mandatory listener; the Player SDK reports all playback errors here. When an error occurs, the SDK will call the corresponding callback, then it will return to the stopped state, notifying the application using PlayerListener.onStopped().

This is an optional listener, notifying the application about buffering starts and stops. The player will resume its previous operation when buffering is completed.

The ViewerCountListener provides information about the content’s audience (all-time viewers and current concurrent viewers). This is an optional listener.

The displayed logo has been clicked; you should open the URL in the callback’s parameter. This is an optional listener.

MetaDataListener provides updates of the content’s meta data, the callback is called when the metadata becomes available. This is an optional listener.

An optional listener to observe track changes in the player (audio, video, text).

The track selection can be controlled with following methods of Player:

For more details see javadoc in MediaTrackChangeListener and Player classes.

The onStopped() callback in PlayerListener indicate a full stop and disconnect from IBM Video Streaming’s servers. If the disconnect happened due to an error, the appropriate callback of ErrorListener indicates the reason. Some of these errors can be resolved by you or the user of your application.

Errors that can be resolved by user (or developer) interaction:

The requested content requires a password. This is represented by receiving an onPasswordLock() callback. After acquiring the password, call player.setPassword(password); then restart the playback by player.play();.

The requested content requires a valid hash token to be unlocked. This is represented by receiving an onHashLock() callback. After authenticating with your Hash service (old Viewer Authentication) and receiving a hash, call player.setHash(hash); then restart the playback by player.play();

This feature is deprecated and it is scheduled to be removed in 2022 Q1. Please migrate to Viewer Authentication instead.

The requested content requires Viewer Authentication. This is represented by receiving an onViewerAuthLock(authUrl) callback. Use the url provided in the authUrl parameter to determine where to go to authenticate. After receiving the token, call player.setViewerAuthToken(token) then restart the playback by (for example) player.play();.

Some errors may occur only temporarily, these might be resolved by retrying the playback with the exact same parameters.

This is a network error, and it is represented by a call to onConnectionError(). Connection errors can happen for various reasons, but most likely there is a problem with the internet connection, (usually it is only temporary) you can try again later by calling: player.play();

The player will try to resolve most of the connection problems internally, but sometimes it is unable to do so.

The broadcaster’s viewer hours are spent. This user can not watch the stream at the moment, try again by calling: player.play();

This error is presented by a call to onViewerHourLimitLock().

This indicates a problem that the Player SDK couldn’t determine, (most likely only temporary) try again by calling: player.play();

This error is presented by a call to onUnknownError().

There are certain errors that could happen due to certain Account, Channel or Video configurations, misconfiguration of the Player instance or even due to context related parameters (even geo location of the viewer). These errors can not be resolved by the viewers nor will go away by themselves.

This is a misconfiguration of the Player SDK. The provided IBM Video Streaming Player SDK key is not authorized to play this content. You need to create a new Player SDK Factory instance to provide the correct key. The key needs to be set upon factory creation: new PlayerFactory(IBM_PLAYER_SDK_KEY, context);.

This error is presented by a call to onInvalidApiKey().

This is a misconfiguration of the Player SDK. The requested live channel or recorded video does not exist.

This error is presented by a call to onNoSuchContent().

The requested recorded video is not available in a playable format. The Player couldn’t acquire a format to play that this device supports.

This error is presented by a call to onContentNotPlayable().

The requested content is not playable in the user’s current geo location. This can happen if account, channel or video specific restrictions have been applied on the Dashboard.

This error is presented by a call to onGeoLock().

There are security restrictions set for the channel, that do not enable the Player SDK to play this content, or your channel has reached its maximum concurrent viewer number. The latter can be resolved by retrying later, to resolve the former the channel’s settings must be modified.

This error is presented by a call to onRestricted().

All of these callbacks discussed in sections Interactive callbacks, Transient errors and Other errors can be found in com.ibm.video.android.player.api.ErrorListener.